We’ve all seen pictures, or maybe we know that dude that has crates upon bins upon boxes upon shelves upon stacks upon buckets of vinyl. But what about those of us that just want to collect and listen to some records but not sacrifice half the space in our home? If you collect vinyl then you’ve begun the chaotic art of managing the density of records collected relative to the volume of space in your home. Recently I’ve found myself faced with this dilemma and contemplating, “How much is too much?” I’ve come to the arbitrary guesstimate of 501 records. Can I keep my collection to just 500 records? And where do I begin when it comes to parsing out what stays and what’s got to go? 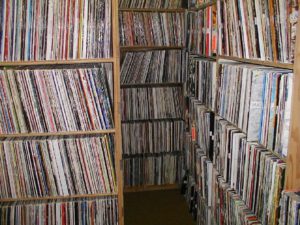 If you have space then you’re probably going to fill it; that’s just human nature. Most people don’t have endless space to keep buying more and more records — and of course there’s the cost. You’ve got to rein that shit in at some point. I’m not going to reach the vinyl maniacs with this line of thinking because some folk are lost to the spinning-black-disc gods of thirty-three, forty-five, and seventy-eight. In truth, what this little exercise really boils down to is yet another way to create a definitive list of the 500 albums I need right now. Of course this is not a permanent thing, so this won’t be just another countdown of the best 500 albums of all time (yes it will). What I’m trying to tell you is that this is a living list — it’s like totally organic, man.

Where to start? Obviously by creating a list, but do I start with the albums I already own and decide which ones to keep, or do I just start listing the albums that I know I want to have available at a moment’s notice? As soon as I mention an actual album, the judging begins. Whichever album springs to mind first… is that the best album of all time? Or is it just one of a dozen that most people will agree should be in everyone’s collection? What if I say the Mary Poppins Soundtrack? How does that make you feel? I recently spoke with a guy who owns a thrift store and he asked what I was looking for. The first thing I said was “The Mary Poppins Soundtrack.” Without blinking an eye he said, “I can get that for you.” And I thought, “Shit, I could get that at any time, but is it really the album I want to go out and get right now?” And then I thought, “Shit, do I really even want that record at all?”

My shopping habits have changed since I began thinking about this process of paring down the collection to 500 records. I have severely retarded my compulsion to buy a record impulsively. Although it didn’t stop me the other day from pulling the trigger on the self-titled debut, limited-edition, green vinyl, first pressing of Aussie punks Brad Pot. It was only $13 so I had to. It arrived, I like it a lot, but if I stick to this 500 idea it will eventually find itself another home. So this is where it leads, if I were to go through my collection today how many records could I definitively say will find themselves spinning on someone else’s turntable in 5 years? 10 years? 20 years? It may turn out that not one single record I own right now will still be collecting the dust that is my own personal dead skin 25 years from today. If I’m really going to limit myself to 500 records there’s going to be some difficult decisions to make. Plus, who knows how I’ll feel 25 years from now? Most likely we’ll be able to “play” records simply by holding them in our hands and blowing gently on the vinyl and registering the whooshes and whirrs with bio-nano enhanced cochlear implants while our ocular enhancement implants follow the current of our breath riding through the peaks and valleys within the grooves. They probably won’t even be made of vinyl, they’ll most likely be made of hemp and Keith Richard’s hair.

The purge has to begin somewhere so I suppose I’ll start with King Gizzard & the Lizard Wizard. They have captured my attention for the past couple years and are in heavy rotation at my house. There’s usually a band or two every couple of years that settles deep into the grooves of my psyche and becomes an integral factor in how I interpret the circumstances of my existence for a while. A couple years back it was Animal Collective. Right now King Gizzard is on a groovy creative rocket to the kick ass dimension, and as a side note their albums are highly coveted. So how much does the fact that other people are prepared to pay triple or quadruple the sticker price of an album effect my own judgment of its value? Am I more likely to hold on to an LP the greater its worth might be in the future? I’m going to have to say yes. If in 15 years I’m fingering through the vinyl and realize I haven’t played a single Gizzard album in who knows how long, will I instead choose to box up and ship out Fleetwood Mac’s Rumors because I can easily stumble upon another one of those wandering the neighborhood’s multi-family garage sale with my eyes closed? Which, naturally, leads me to ask the next obvious question, “Is Rumors better than anything King Gizzard put out?” I might have to keep it all, this is going to be a lot harder than I originally thought.