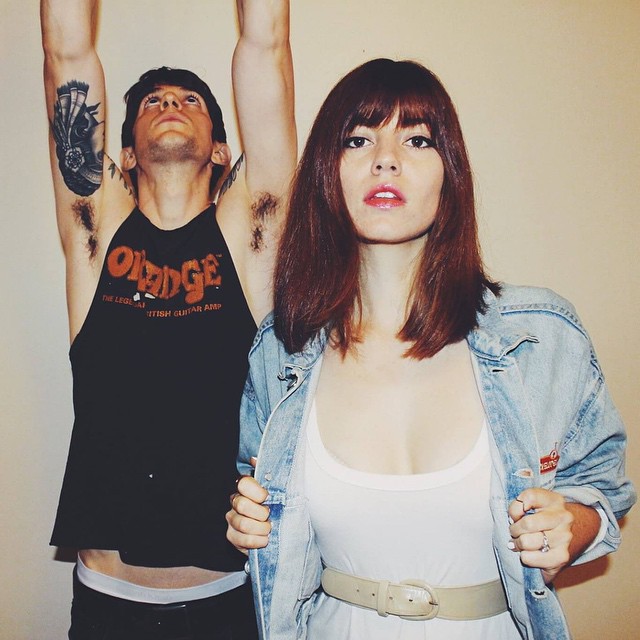 Who doesn’t like a good love story? Oh, you pretty things… who meet at a party the day the Mayans predicted would be the end of times, share a bond over a mutual appreciation of Roxy Music, are engaged a few short weeks later, and decide to start a musical duo together (I’m not making this stuff up). Undoubtedly, all of this takes place as fog gently rolls over the majestic sleeping lady of Mount Tamalpais that overlooks their apartment in Mill Valley, a woodsy village across the Golden Gate from San Francisco. This is the story of Karmen Kimball (vocals/keys) and Alex Lasner (guitar/keys), known collectively as Maybe The Moon (also the title of an Armistead Maupin novel).

MTM’s first single, “Two Birthdays”, opens with a synth arpeggio which could have been ripped from the soundtrack of Top Gun, followed by a hip-hop beat which swings a bit much for me (but I’m nitpicking), and then blossoms into a beautiful piece of indie soul as Kimball’s sultry voice hits some very pleasing notes over some jazz-like chord changes. As things progress, there are some great synth moments that hint at being a bit “Kraut-y” and add a welcome bit of edge to the track.

Let’s hear from Maybe The Moon:

1. Which came first, the love or the music?
It was a bit of a one-two punch, actually. We ended up drinking a few too many beers on our first date, and got up and played “Rhiannon” by Fleetwood Mac at an open mike that was going on at the bar. There was instant musical chemistry, instant personal chemistry, and an overwhelming feeling that life would never be quite the same from that moment on. Pretty heavy stuff for a first date…

2. Band names are hard. How did you come up with Maybe the Moon and how long did it take to arrive there?
“Maybe The Moon” was a lyric I wrote for a song by the band Karmen and I were playing in together, before Maybe The Moon. The lyric was, “An elephant sits in the room//No one’s listening/Maybe the moon?” It always had a nice ring and energy to it, so fortunately, we didn’t have to look very far for the band name.

3. Two Birthdays is synth-based. What do you have against guitars?
Two Birthdays is actually the first recording I’ve ever done to feature no guitar, whatsoever. Guitar has been my main instrument since age 10, and I think it was just time to get out of my comfort zone a bit. The single we’re planning on releasing next month has a bit of guitar on it.

4. Is there an LP on the horizon?
Our plan as of right now is to release a new single either each month or every other month of 2015, and when we’ve released nine or 10 songs, sequence them as an album, and do a limited run vinyl pressing. That’s just today’s plan, who knows if we’ll stick to it. That’s part of the fun, right?

5. Any recommendations for visitors to your Mill Valley hometown village? I’m bummed they closed Small Shed Flatbreads.
Funny you should mention Small Shed Flatbreads. Karmen actually worked there for a few months, when she first moved in with me, and I used to visit her on her shifts, pretty regularly. I remember blasting Tears For Fears albums over the speakers, and scrambling to turn the volume down when customers would come in. I hope we didn’t have something to do with them going under!

As far as recommendations go, we’re big fans of the cronuts from Beth’s Community Kitchen, the house blend coffee from Equator, and Mark Pitta & Friends Tuesday Night Comedy at the Throckmorton Theatre.