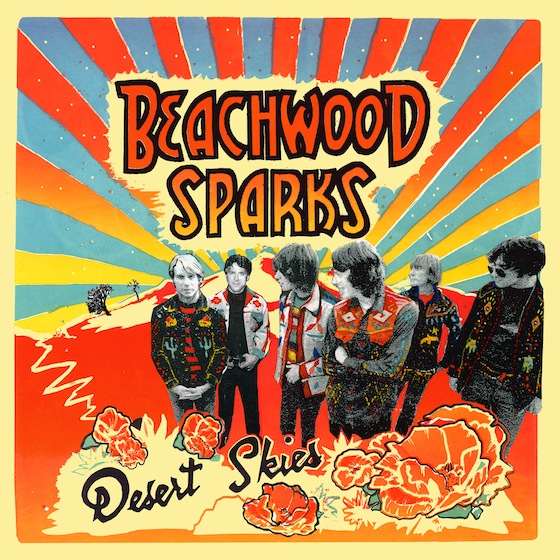 Beachwood Sparks remain as one of my favorite bands from around the turn of the century (yes, it’s ok to say that now that we have passed the aughts and are now well into our teens). The cosmic country rockers from Los Angeles have finally decided to dust off and issue their “lost” first album. Self-produced and initially intended to be their debut, the album was shelved when they signed with Sub Pop to begin work on their eponymous Beachwood Sparks (Sub Pop, 2000). The newly remastered Desert Skies, which is due to hit stores November 26th, contains new mixes of the previously released “Desert Skies” and “Make It Together” (released as a single in 1998), along with the rest of the album which has gone mostly unheard until now.

The sound of the album generally leans heavier and more shoegaze-y when compared to the Sub Pop albums. It is interesting to hear the band in this earlier phase which partially bridges the gap between the members’ previous groups, the quintessential ’90s emo Strictly Ballroom and indie-rock band Further (guitarist/singer Christopher Gunst was in both bands), with the breezy California country rock for which Beachwood Sparks are generally known. The title track “Desert Skies” has a completely different feel from the latter version — an electric guitar-driven 4/4 beat versus a much lighter, swinging cut time feel. “Make It Together” also seems to take more rock cues, hinting more at the Alex Chilton Big Star songbook than the Brothers Burrito. “Sweet Julie Ann” takes on an almost British pop/shoegaze tint, reminding me of Ride or Pale Saints. Who knows? Maybe they were tapping into some Unicorn, arguably the best (and maybe only?) British country rock band of the 1970s.

Listening to Desert Skies is like a magic stagecoach which time-travels to the mythic Silver Lake of fifteen years ago — back to a time when Beachwood Sparks took up a summer residency at Spaceland and channeled the ghost of Gram Parsons.

Extra nerd info:
The name Beachwood Sparks was apparently derived from the location where the band rehearsed which was located at the intersection of Beachwood Dr. and Sparks St. True story.

TRACK LISTING:
1. Desert Skies
2. Make It Together
3. Time
4. Watery Moonlight
5. This Is What He Feels Like
6. Sweet Julie Ann
7. Canyon Ride
8. Midsummer Daydream